The relationship between the Old and New Testaments is notoriously complex, and there are a variety of different ways of approaching the issue. I believe that one of the most fruitful is studying how the New Testament authors quote from, allude to, or echo Old Testament texts. Yet even when one does this, the way that NT authors interact with OT texts can often seem strange. At times they seem to assert that certain events fulfill what was promised in the OT, yet when one reads the OT text(s) in question it can sometimes be hard to see it.

Enter the new book by G.K. Beale and Benjamin L. Gladd: Hidden but now Revealed: A Biblical Theology of Mystery. 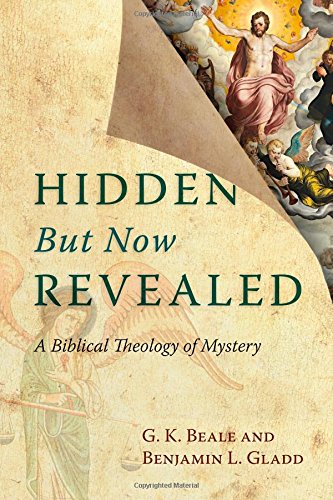 They use the concept of “mystery” as their entry point for exploring the relationship between the OT and NT. They define mystery as:

the revelation of God’s partially hidden wisdom, particularly as it concerns events occurring in the “latter days.”

Their starting point is how the term is used in Daniel, since that sets the foundation for how it is used in the NT. From there Beale and Gladd look at specific occurrences of the term mystery in Early Judaism, Matthew, Romans, 1 Corinthians, Ephesians, Colossians, 2 Thessalonians, 1 Timothy, and Revelation. They also include chapters on the concept of mystery in the NT where the specific word does not occur, as well as the difference between mystery within Christianity and the pagan mystery religions.

Also of note is an appendix by Beale entitled, “The Cognitive Peripheral Vision of Biblical Authors.” It tackles the thorny issue of cases where the NT authors appear to draw meaning from an OT text that goes beyond the conscious intention of the OT human author.

As a Ph.D student at Wheaton College, I had the privilege of learning from Dr. Beale, as well as become good friends with Ben (who was studying under Beale). I can think of no two men better qualified to trace the theme of mystery and tease out the implications for our understanding of the Old and New Testaments.

You can find an early review of the book here. It promises to be a significant contribution to our understanding of biblical theology and how the Old and New Testaments relate to each other.