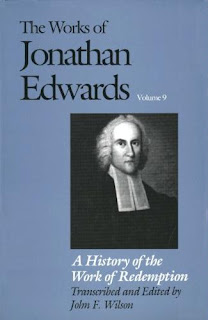 This past week I acquired a work of Jonathan Edwards that I have had on my radar for some time: The History of the Work of Redemption. It originated as a series of 30 sermons that he preached between May-August 1739. His goal in preaching the series was to trace God’s work of redemption from the Fall all the way through to the consummation. In other words, it was similar to a biblical theology organized around tracing the storyline of Scripture. He chose as his keynote text Isaiah 51:8

“For the moth will eat them up like a garment, and the worm will eat them like wool; but my righteousness will be forever, and my salvation to all generations.”

Launching from this text JE laid out his “doctrine” for the entire series: “The Work of Redemption is a work that God carries on from the fall of man to the end of the world.” He restated this doctrine at the beginning of each of the 30 sermons in the series, partly to retain the standard Puritan preaching template and partly to remind his hearers of the central thesis that shaped each sermon no matter where in the biblical storyline JE was.

Towards the end of his life JE expressed his intention to transform this sermon series into a treatise. In a letter to the trustees at Princeton expressing his reluctance to accept their invitation to become the president of the university, JE mentioned this project as one of his top priorities:

“But besides these, I have had on my mind and heart (which I long ago began, not with any view to publication) a great work, which I call A History of the Work of Redemption, a body of divinity in an entire new method, being thrown into the form of an history, considering the affair of Christian theology, as the whole of it, in each part, stands in reference to the great work of redemption by Jesus Christ; which I suppose is to be the grand design of all God’s designs, and the summum and ultimum of all the divine operations and degrees; particularly considering all parts of the grand scheme in their historical order. The order of their existence, or their being brought forth to view, in the course of divine dispensations, or the wonderful series of successive acts and events; beginning from eternity and descending from thence to the great work and successive dispensations of the infinitely wise God in time, considering the chief events coming to pass in the church of God, and revolutions in the world of mankind, affecting the state of the church and the affair of redemption, which we have an account of in history or prophecy; till at last we come to the general resurrection, last judgment, and consummation of all things; when it shall be said “It is done. I am Alpha and Omega, the Beginning and the End” [Revelation 22:13]. Concluding my work, with the consideration of that perfect state of things, which shall be finally settled, to last for eternity. This history will be carried on with regard to all three worlds, heaven, earth, and hell: considering the connected, successive events and alterations, in each so far as the Scriptures give any light; introducing all parts of divinity in that order which is most scriptural and most natural: which is a method which appears to me the most beautiful and entertaining, wherein every divine doctrine, will appear to greatest advantage in the brightest light, in the most striking manner, showing the admirable contexture and harmony of the whole.”

Despite his reluctance, JE eventually decided to accept the position as president of Princeton. Unfortunately, he died within a few months of arriving at Princeton from a smallpox inoculation that produced a fever which eventually killed him. Although he had begun collecting additional materials in his notebooks to be incorporated into the revision, he was never able to begin the revisions in earnest. At the urging of the Scottish clergyman John Erskine, JE’s son Jonathan Edwards Jr. transcribed the sermon series and sent it off to be published in Scotland in 1774.

Had JE been able to make the intended revisions, I suspect that the finished product would have ranked among JE’s most important theological contributions, right alongside works such as Freedom of the Will and Original Sin. As I continue to work my way through this work, I anticipate finding several things to post on in the weeks to come.